Our annual all-church retreat to Sandy Island is this weekend, and our topic this year is heaven, or what we’ve called: Longing for Home: The New Heavens and the New Earth.

It’s a pretty important question. If the Christian hope involves eternity with God in heaven, then it’s probably a good idea to understand, as much as is possible, what that looks like. What are we waiting for? What does the Bible actually promise? How does it deal with what’s wrong in this world? And what difference should that make for how we live our lives today in a fallen world?

And yet in my experience and observation, a lot of the common ideas people have today about heaven are not only rather dull and unexciting, but actually fall far short of being biblical.

A Shallow View of Heaven 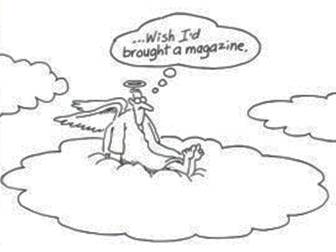 When I was growing up, heaven was essentially just the place you went when you died. And my theology of heaven came more from Tom & Jerry or Looney Tunes than it did the Bible. Wile E. Coyote was riding a rocket after Road Runner, then goes careening off the cliff; the next frame he’s riding a cloud, with wings and a halo, floating his way up to heaven. It’s just what happens.

Turns out, I wasn’t the only one who thought about heaven this way. This Far Side comic serves as the first case in point.

But even a century before that, in Mark Twain’s The Adventures of Huckleberry Finn, Huck describes his conversation with Miss Watson:

She went on and told me all about the good place. She said all a body would have to do there was go around all day long with a harp and sing, forever and ever. So I didn’t think much of it. . . . I asked if she reckoned Tom Sawyer would go there, and she said, not by a considerable sight. I was glad about that, because I wanted him and me to be together.[1]

One of author Russell Moore’s atheist friends captures the same disenchantment from another angle: “At least the Muslims had virgins waiting in Paradise for sex, . . . but who would want to play a harp, at any time, much less for all eternity?”[2]

Somewhere along the way, we’ve come to think of heaven as this eternally disembodied state, with angelic souls floating on clouds, shed of the prison of their bodies in eternal bliss and contemplation—an idea that resonates much more with ancient Gnosticism and Plato than it does the Bible.

But add a little Bible and the picture doesn’t exactly get a whole lot better. Mix in a dash of Revelation 5 and now instead of riding on clouds, we’re spending our disembodied eternity in an unending worship service. I don’t mean to be disrespectful, but imagine being stuck in a church service that goes on forever. It’s enough to make the stoutest heart falter. This idea of heaven prompted one former evangelical to write an article entitled, “Ten Reasons Popular Versions of Heaven Would Be Hell.”

But there are other ideas. For some of us, sentimentality reigns. Heaven is basically a big family reunion, where we’re finally reunited with deceased friends and family. This is one of the dominant themes of the spate of best-selling “heaven tourism” books that have come out in recent years—the so-called ‘eye-witness’ accounts of trips to heaven and back (which are problematic in several ways).

For others, selfishness reigns. Heaven is whatever we love most about earth multiplied by infinity. Consider this celebrity survey in People magazine, when asked “what’s your idea of heaven?”:

EDIE FALCO: Finding a parking space in front of my house.

BILLY BOB THORNTON: Living on a lily pad with all the German chocolate cake and fried okra I could eat, with all my children.

UMA THURMAN: It would be sweet, intimate, pretty and really private.

ADAM MESH (Average Joe): All-you-can-eat buffets where you never get full, a basketball court where I could dunk—and I'd still have all my hair.

LUDACRIS: A life of no work and just spending money. There's no limit to what I can spend money on.

We might mock that kind of unbridled selfishness, but when we look at some religious descriptions of heaven today, what we find is not much different. One devotional called A Travel Guide to Heaven declares that “paradise is ‘Disney World, Hawaii, Paris, Rome and New York all rolled up into one’—the ‘ultimate playground, created purely for our enjoyment.’”[3]

And for still others, particularly on the secular side, heaven is less about pleasure and more about closure. Think of the immensely popular works of Mitch Albom—The Five People You Meet in Heaven and Tuesdays with Morrie. New York Times columnist David Brooks writes:

the heaven that is apparently popular with readers these days is nothing more than an excellent therapy session. In Albom's book, God, to the extent that he exists there, is sort of a genial Dr. Phil. When you go to his heaven, friends and helpers come and tell you how innately wonderful you are. They help you reach closure. In this heaven, God and his glory are not the center of attention. It's all about you.[4]

What these visions of heaven have in common is their refusal of transcendence. They are unable to believe in anything more important than the individual human being or more significant than his or her earthly suffering. . . . heaven means a chance to get our inner lives right at last. . . . Instead of angelic choirs, it now seems, we will be greeted in heaven by the sound of a billion voices, all talking about themselves.

Friends, Jesus died for much, much more than this.

We Need a Better Vision of Heaven

The problem, of course, with these popular notions of heaven is not only that they are unbiblical (or at least sub-biblical), which they are. The problem is also that none of them are worth hoping in.

What we often find ourselves hoping for in the name of heaven is not only too shallow to actually satisfy the deep longings of our hearts, but falls woefully short of addressing what’s really wrong with this world, or realizing the plan of God's good creation from the beginning.
We need a better vision of heaven—a biblical one: the new heavens and new earth. And that’s what we’re going to talk about at Sandy Island this weekend.

There’s still time to join us if you’re interested; find out more here.